In the new world of E-books, independently published books are displacing books marketed by the giant big six traditional publishers. The Seventh Stone, a thriller that has the action of Indiana Jones and the history of Dan Brown, is proof. The book is now on three Amazon best seller lists and continues to climb the rankings.

The Seventh Stone is action-packed with a mysterious shaman, a brutal murder, bloodthirsty pirates, vicious beasts, a ruthless villain, a gunfight at an archeological site, a brilliant and beautiful heroine and a ruggedly handsome hero—no spoilers here, only the highlights from the opening scenes. At the action’s core is a lost Biblical artifact, the Breastplate of Aaron, and the deadly chase to find seven legendary gemstones stolen from it. According to Exodus, God commanded man to create the Breastplate so they could hear His word directly, an answer to humankind’s most compelling question. The Seventh Stone is provocative and suspenseful, and may spark controversy as it challenges the line between reality and faith.

“Publishing The Seventh Stone has been a thrill ride in itself,” said Hegarty. “If I followed the traditional publishing route, the book wouldn’t even be available to readers for a minimum of eighteen months. I didn’t want to wait that long.” Independent publishers control the price, the cover design, how the book is marketed and where it’s sold. “The best part is we reach the reader directly,” said Hegarty. “And readers can reach us. Authors love this.”

The heroine is 29-year-old Christa Devlin, is a Princeton historian and feisty fencer who speaks fluent Latin and can solve puzzles while dodging bullets. The villain, a pharmaceutical titan bent on fulfilling his family destiny to start a new world religion no matter how many lives it costs, feels a bond with Christa. He, too, lost his mother to murderers and seeks retribution and redemption. He kidnaps Christa’s beloved niece and poisons the water supplies in New York City and Princeton to insure her cooperation.

Hegarty has explored more than thirty-five countries on six continents. She summited Mount Kilimanjaro, backpacked the Inca Trail to Machu Picchu and camped with lions in the Serengeti. She has written and contributed to ten travel guides and more than three hundred articles. 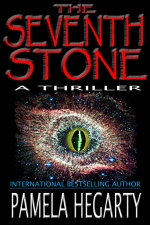